All Book Listed Are Available At Major Bookstores.

The birth of “GirlRO’S” originated in march of 2000, after The National Human Genome Research Institute awarded a $250 million-dollar research grant to Lucile Adams-Campbell Epigenetics Genome Institute, for a (DNA) subject paring research study that may lead to enhanced antibodies in their test subject’s offspring. 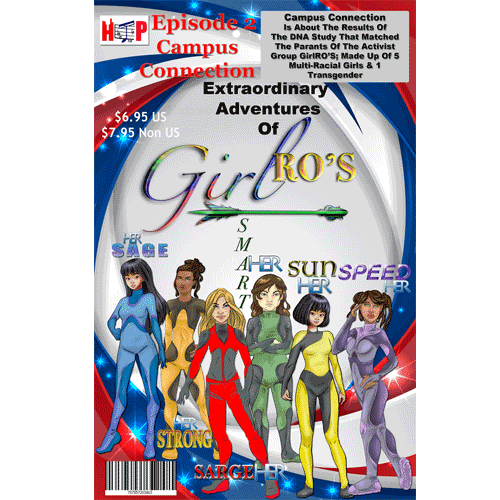 Episode 2  “Campus Connections” GirlRO’S” originated as a book & Comic Book Series, set in the backdrop of America’s most diverse city, Houston, Texas in 2025, with missions around the world.

The missions that GirlRO’S undertake, expands in each new issue of the comic, with a variety of challenging, yet ongoing possibilities for helping others. “The next big idea in health prevention” says Jjay Free Entertainment Beat Writer, Waiting Room, USA Magazine.

The birth of “GirlRO’S” originated in march of 2000, after The National Human Genome Research Institute awarded a $250 million-dollar research grant to Lucile Adams-Campbell Epigenetics Genome Institute, for a (DNA) subject paring research study that may lead to enhanced antibodies in their test subject’s offspring.

Using the theory of Epigenetics, trails carried out at the LAC Epigenetics Genome Institute campus, headed by the managing Director, Professor Sensor Knowsit. The paring couple’s kids inherited genomic traits will hopefully provide them with the ability to produce vaccines, that may prevent virus and bacterial infections prior to any epidemic.

Epigenetics is the study of how the environment around us, including the nutrition and the choices we make, can change the expression of inherited genes. Each person has within them the ability, to turn select genes on and others off at will (It Is Understood that the mind creates anger, fear depression and negative thoughts that breaks down the immune systems, just as happiness, caring and positive thoughts strengthening the immune system all controlled by the mind.) and whether learned training in gene regulation can then passed on to a child.

Epigenetics, as a simplified definition, is the study of biological mechanisms that will decide which genes are switched on and off. Genetics is the study of heredity and the variation of inherited characteristics, GMO (genetically modified organism) and the physical manipulation of the structure of DNA.

There are no reviews yet.

Related Products
Its Not All Black & White

$14.99
Add to cartQuick View
Dairy Of A Mail Order Bride

The presence of the First Lady Of The US, a for

$14.99
Coming Soon
Quick View
What Other People Should Know About Black People

The 9-Chapter Book Gives A Revealing Insight In